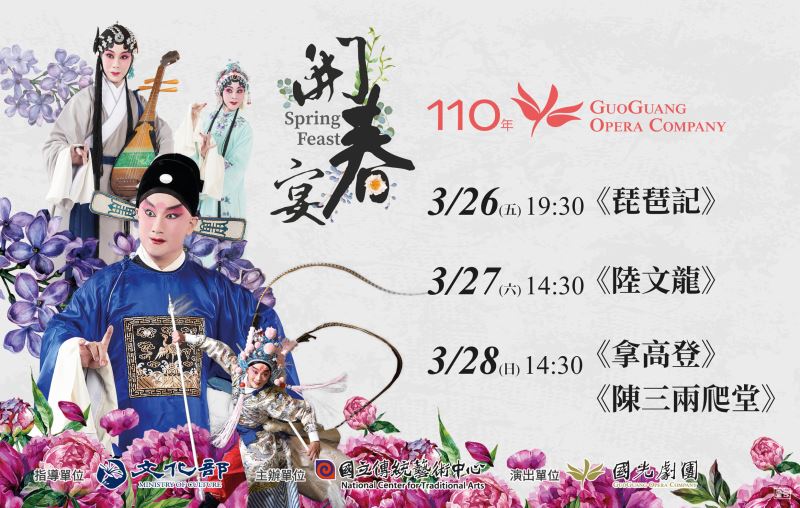 The Lute – Nanpu / Resigning / Painting Portraits / The Study (Kun Opera)
In Chenliu County in the Eastern Han Dynasty, a scholar named Tsai Po-Chieh just married Chao Wu-Niang. Forced by his father, Tsai Po-Chieh had to go to the capital for examinations and leave his wife. They had a sincere conversation and said good-bye in Nanpu. Tsai Po-Chieh then won the first place and was forced by Grand Councilor Niu to marry his daughter. Tsai had borne his parents and wife, who were still waiting in the hometown, in mind, he submitted a resign but got refused by the emperor.
A famine stroke in Chenliu County, Tsai's parents died of starvation. After burying her parents-in-law, Chao Wu-Niang painted a portrait of them and started heading to the capital, begging on the way by playing her lute and singing. At the end, she was finally reunited with her husband in his study.

Lu Wen-long (the complete edition)
At the end of the Northern Song Dynasty, the troops of Jin besieged Luan Province. Military Commissioner Lu Deng sacrificed his life and his wife hung herself to preserve her chastity. Jin Wu-zhu, who was moved by their loyalty, adopted their son, Lu Wen-long. He brought him back to the north and raised him there as his own son. 16 years later, Lu Wen-long went down south with his troops to rescue Wu-zhu at Zhuxian Town. On the battlefield, he defeated several Song generals. When Commander Yue Fei found it difficult to come up with an effective strategy to fight against Lu, Lu Bao revealed the true background of Lu Wen-long to him. Lu Bao, who had been a general under Lu Deng, had been lying on the ground seriously wounded at the moment when Jin Wu-zhu took Lu Wen-long as his son, so he had witnessed the whole scene. When Wang Zuo, Yue's advisor, learned about this, he cut off one arm and pretended to surrender to the Jin camp. Then he convinced Lu Wen-long to turn against Jin with the story of his true identity. Lu Wen-long finally decided to accept his true identity and serve the Song camp.

Catching Kao Teng (The Bright Sun Mansion)
Kao Teng, son of the treacherous official Kao Chiu, was a man with a lewd manner who was good at martial arts. It was around the Tomb-Sweeping Day, the Green-faced Tiger, Hsu Shih-Ying, was cleaning up the gravesite with his mother and sister. Kao Teng ran into them and kidnapped the sister, Hsu Pei-Chu. Chasing after Kao Teng, Hsu Shih-Ying met Hua Feng-Chun, Chin Jen and Hu Yen-Pao, who accompanied him to save his sister. The four invaded Kao's house, burnt the Bright Sun Mansion, saved Hsu Pei-Chu and killed Kao Teng.

Chen San-Liang Crawling in the Court
In the Ming Dynasty, there was a talented woman Chen San-Liang. To bury her parents, she had to work in the courtisanerie industry. Instead of prostitution, she made a living only by her talent. She worked desperately, providing her sworn brother Chen Kuei a chance to study. Chen went to the capital, aced the exams and was granted a position by the emperor. After Chen left, the bawd sold Chen San-Liang as a concubine to the wealthy businessman Chang Tzu-Chun. San-Liang resented being in the situation and wanted to kill herself. Chang Tzu-Chun and Wei Peng, the owner of the inn, conspired together to sue Chen San-Liang and bribe the magistrate. Li Feng-Ming, the corrupt magistrate, questioned San-Liang in a trial, San-Liang defended herself and told the story of her miserable life. And yet, Li continued to try testing San-Liang with his family heirloom, the Ma-Yi physiognomy book, but her answers were all flawless. Realizing that San-Liang was his long-lost sister, Li was speechless. He got scared when he knew that the new Discipline Inspection Officer was on his way, so he apologized to San-Liang. She reproached him in anger. Chen Kui arrived and caught up on the situation, he asked how San-Liang wanted to deal with her brother. San-Liang immediately told him to chastise her brother and expel him to the border army.

Performer：GuoGuang Opera Company
Organizer：National Center for Traditional Arts
Advisor：Ministry of Culture
*Please visit our official website for the latest updates.
*The organizers reserve the right to make changes to the event program.